Footprintless around the world
25. April 2018

On a container vessel from Japan to Mexico

Finaly I arrived on the American continent, after 12 days on a cargo ship! It was a huge boat, with 9’500 containers! 300 m long, 40 m tall and 68 m high from the lowest to the highest point! It was an amazing experience! And so many surprises were waiting for me on the boat. 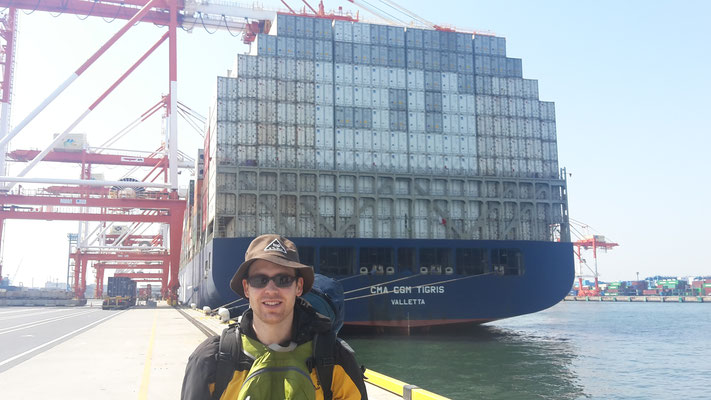 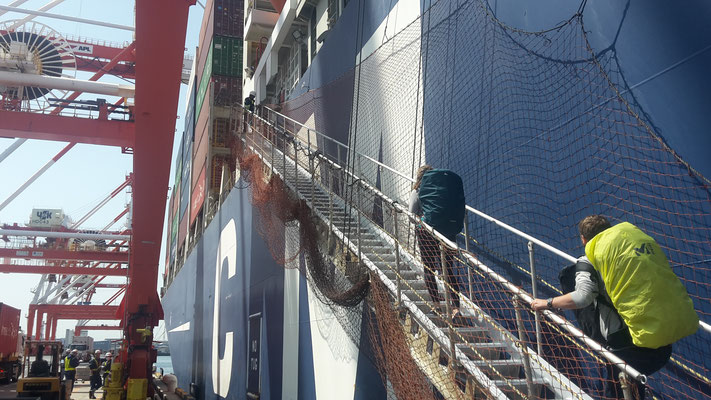 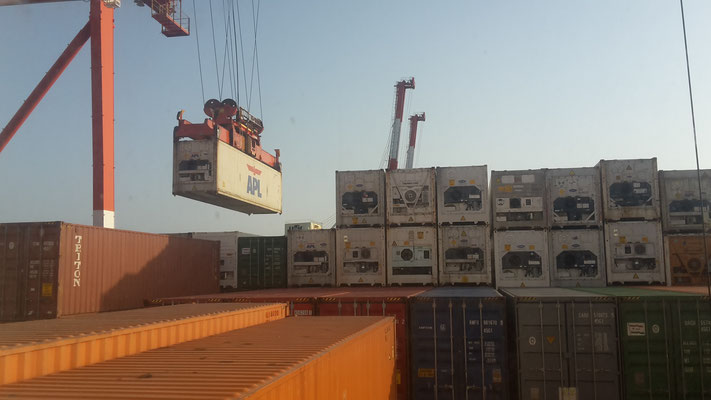 Some nature laws, which I thought to be unchangeable were suddenly not anymore valid on board. A day has well 24 h and a week 7 days? Right? No! Not if you cross the pacific by boat! Suddenly a day had only 23 h, and the week 8 days! We were moving west, with about 38 to 40 km/h. This gives almost 1’000 km a day! This means, that roughly every day you reach a new time zone! The sun rises 1 h earlier every day! Of the 12 days we had 8 times only 23 h! of which 7 days in a raw! From Monday to Saturday. Sunday we were not changing so that the workers don’t lose an hour of their only day off… And yes, this was no mistake: 7 days from Monday to Saturday! Because the first time in my live, I could wake up 2 times on Wednesday the 4th of April! This was quite a funny thing, when we crossed the international date line! We had the whole day Wednesday the 4th! In the evening I went to sleep, and in the morning the second “Wednesday the 4th” started! So the week just became 8 days! 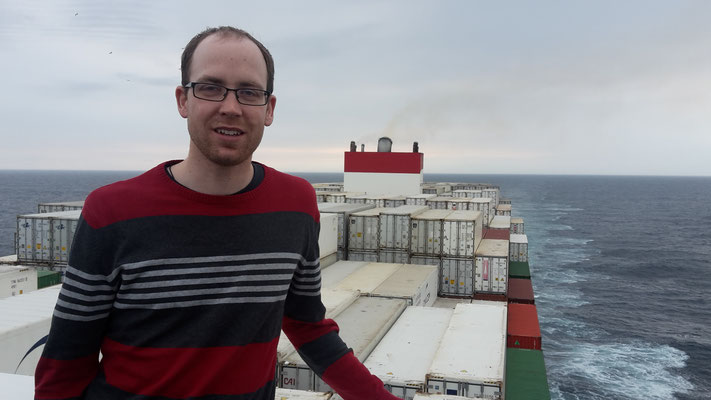 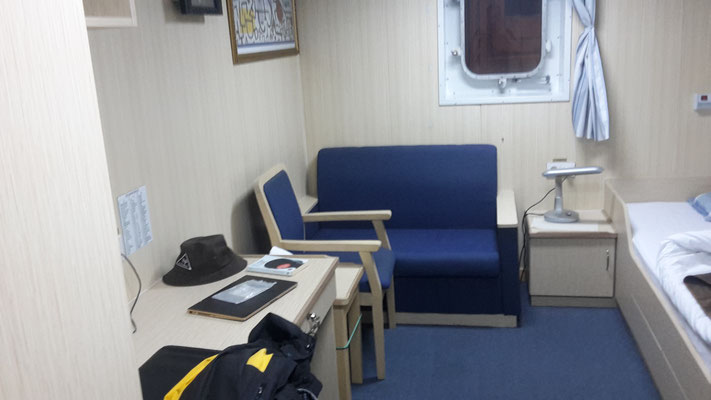 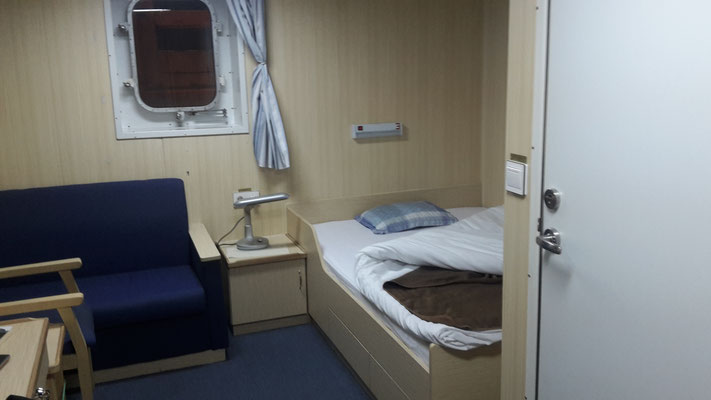 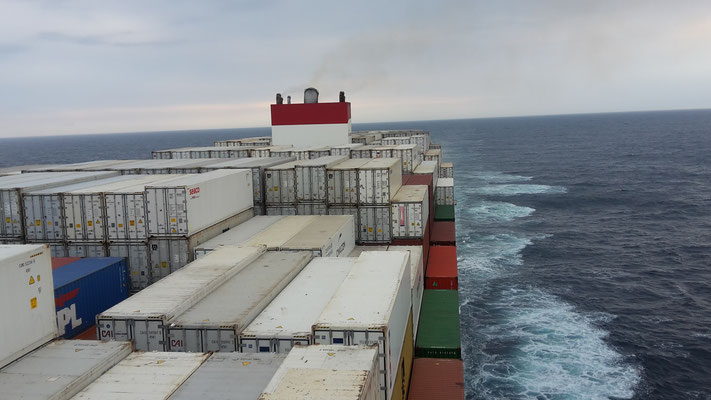 The live on board, quite too luxury for my standard :-)!

But let’s start at the beginning: On 29th of March I could board the vessel. Meeting at 10 am with the immigration office. That’s where I met 3 other travellers which will take the same boat like me! This was amazing not to be alone on the boat! And it’s really an exception! The captain later told me it’s just the second time he has passenger on board! So, it’s really not such a common way of travelling. In the immigration office we just got stamped out of Japan. However, the harbour was 4 km further. It was quite funny to be stamped out of a country and actually still be inside, freely been able to move around the city while boarder control was already over! 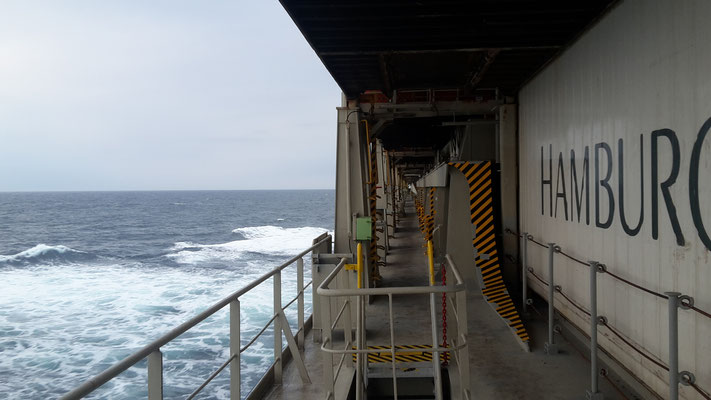 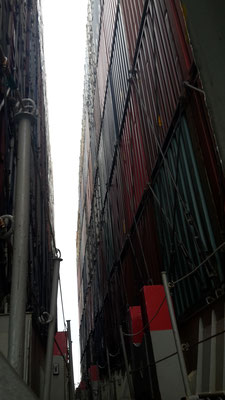 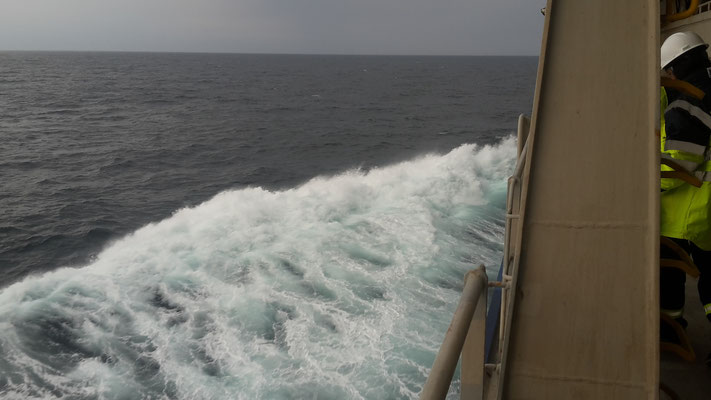 Walking around the boat, and huge walls of containers!

We finally arrived at the harbour and could just get in to the boat without any passport or luggage check at all! That’s something I really didn’t expect! Finally on board we could move freely around! During the 12 days, we could spend as much time as we wanted on the bridge and they explained us all the instruments! The chief mate showed us the hole boat and the chief engineer showed us the whole engine building while we were on see and the engine running! It was really interesting to see the engine and all belonging instruments, which was already a several floors high building! 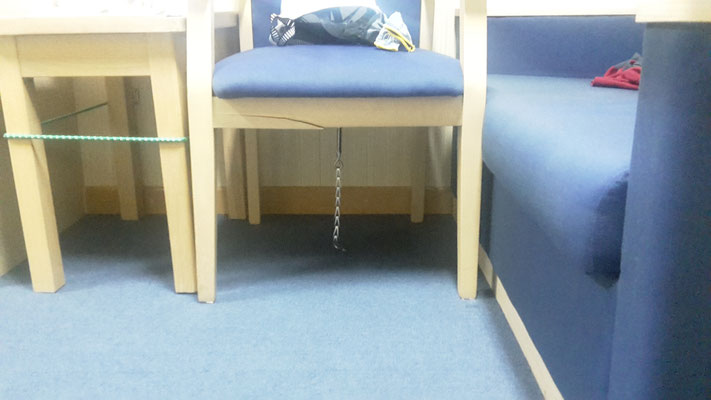 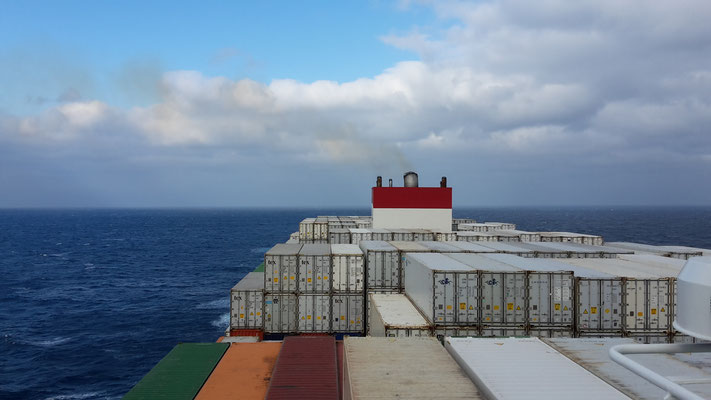 Prepared for the storm! All objects are fixed to the ground!

The living area with the cabins, bridge, restaurant, gym and even an indoor basketball, volleyball, table tennis place was a huge several story building! 12,5 floors or almost 40 m high in fact! It wasn’t very tall, but there were so many floors and so many stairs! There was a lift, but we never used it to still move a little bit in the days on board. So we were every day climbing up and down countless floors… 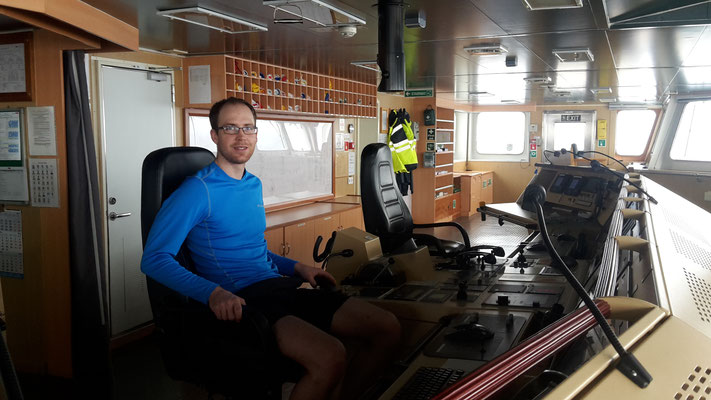 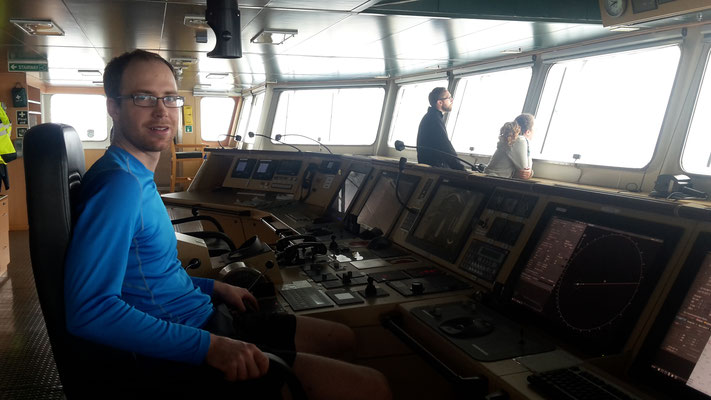 Me on the captains chair! We "tourists" were alloud to sit there, however all other people not! Just the captain could sit there! In reality sometimes the whatchmans were sitting, but each time when the captain came in, they jumped up and stood in front... It's still a strong hierarchy

Another surprise was the way we were taking! While Ensenada in Mexico is just a little more south then Yokohama in Japan, we didn’t straight head west, no we actually mad a huge turn to the north, up to almost 45°, which is more north then Vladivostok in Russia. The reason is quite simple: Because the earth is round and the north on the maps extremely stretched it was way shorter to make a circle to the north then to head straight west! So we just took the shortest way. And up in the northernmost point temperatures fell back to 1°C, while in Yokohama it was already almost 20°! 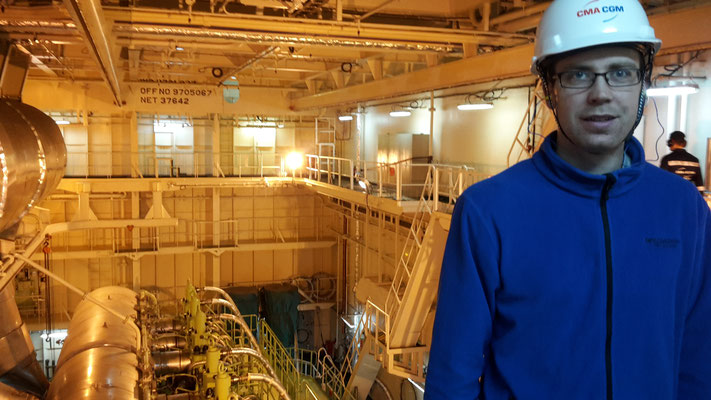 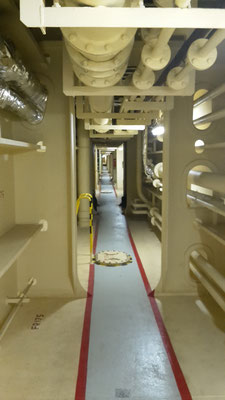 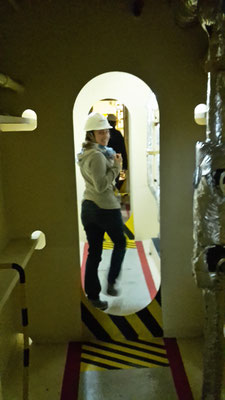 In the belly of the boat :-) Huge engine room and small coridors...

The weather was then quite a surprise! The pacific is known for it’s really rough waters, huge waves and extreme wind speed! So I expected the ship would move around like crazy in some parts, but we actually experienced a rather calm pacific! However there were still some periods when the boat was moving around, with a maximum of 13 degrees to the left and 13 degrees to the right (which means the ship was leaning right, accelerating to about 20 km/h then stopping left and turning back with about 20 km/h on the highest floor every 16 seconds.) While the maximum movement, some bottles fell, some objects fell of the table, the soup was quite moving in the plate, but normal eating on the table with an soft anti- slippery surface was still possible without too much problems. However the night was another thing: No-one could really sleep – including the crew which already experienced much worth rolling! Sleeping on the side was not possible, the movement always just turned me on my back. The best position was on the back, were you are much more stable. However the constant moving around in the bed kept me awake almost the whole night. For the second stormy night I discovered however a much better position: Sleeping 90° turned in the bed so that I was not sleeping sidewards but the long way to the moving. However the bed was to short in this position. But with an additional chair for my feets and the tiredness of last night I could finally sleep quite ok. But the best thing was: nobody got seasick at all. 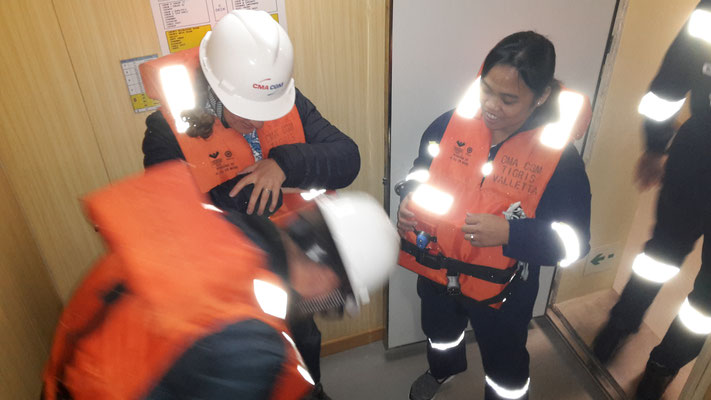 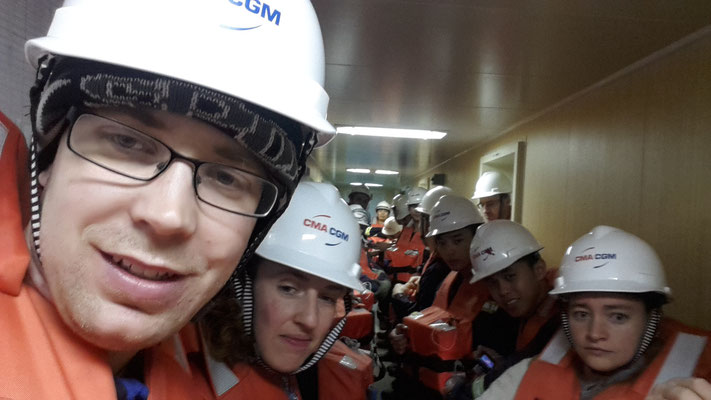 Alarm! We need to evaquate the boat! How good this was just an exercice...

Finally, once during the ride we had the fire alarm running. So we had to get up to the bridge immediately! But luckily it was just a fault alarm.  It was at 2pm, but they told us sometimes it can happen in middle of the night 😊 An other amazing thing: There were birds traveling with us! All over the whole pacific! And the captain told us sometimes there are some small birds and big predators! So during the whole ride the small birds try to hide between the container while they are hunted by the big predators! 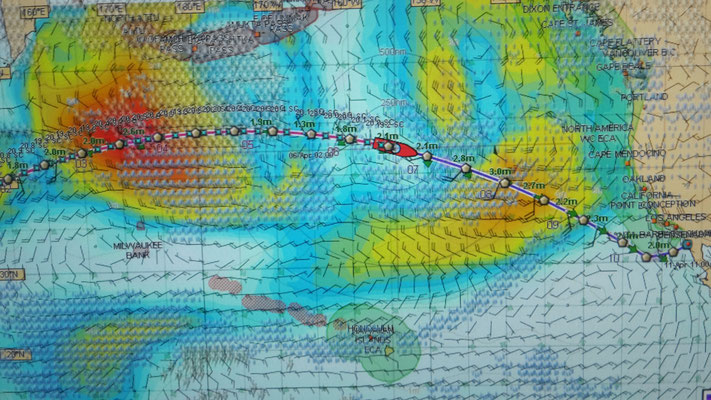 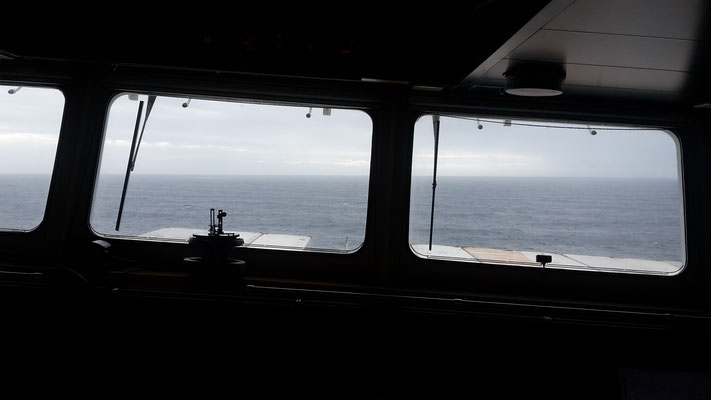 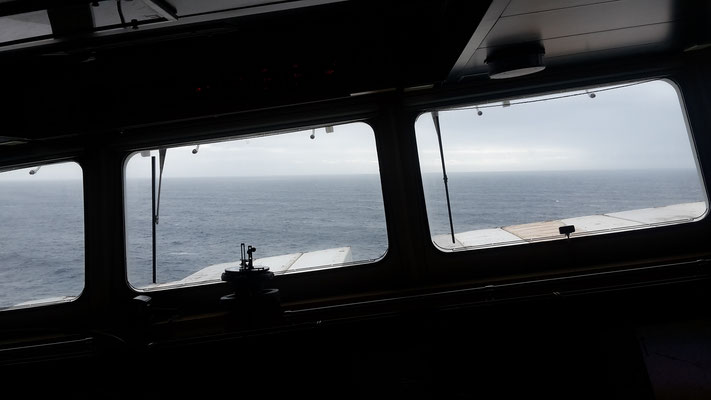 We are in relatively calm see in between of two huge fronts. The dark red areas have 12 m high waves! But the fronts are traveling with us, so we never need to cross them. However as you can see in the other 2 pictures, the boat was sometimes still rolling quite a bit. The see horizen is stright, the boat is leaning to both sides - every 16 seconds from left to right to left...

Everyday actually the ship used fuel for 50’000 $! Or 140’000 tonnes! While the salary of the whole crew (32 people) was just about 4’500 $ per day! So the costs for fuel were about 10 times higher then the costs for salaries. And most important is that the ship is moving, because every day of stop costs about 1 Mio $! Because that’s about how much they earn per day for the transport of all containers. 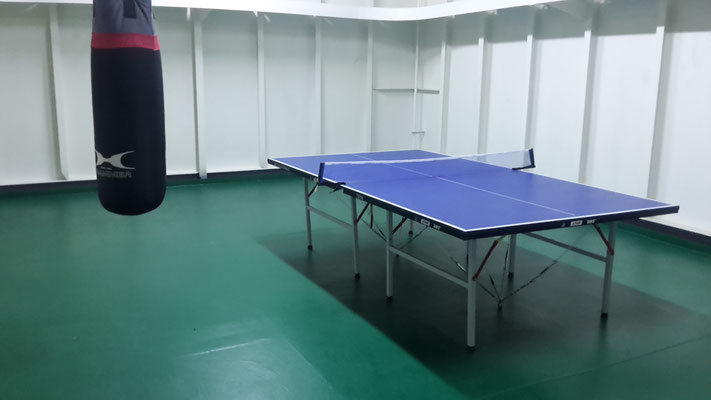 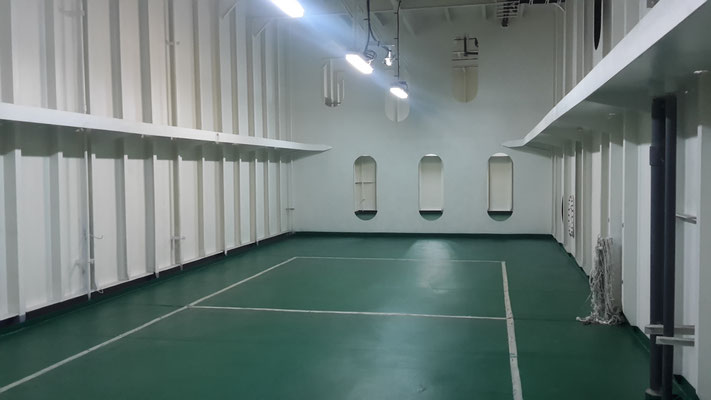 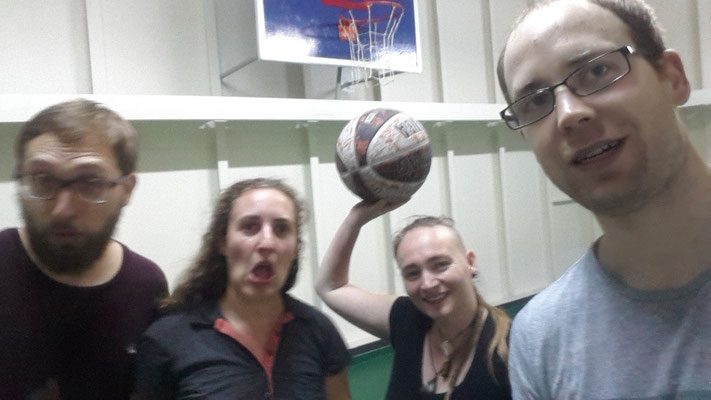 Sport on the boat.

And then after 12 days and nights of nonstop driving we finally arrived in Ensenada! And none of the days was boring at all! I couldn’t even do most of the tasks I planned! I learned some Spanish, we went to the gym every morning after breakfast, we had amazing meals 3 times a day from the ships cook, we were playing basketball always after dinner (which was specially funny when the boat was moving from side to side!), and in the evening I was discussing or playing cards with the other passengers. (And practicing my French which got really bad after learning Russian, however after the first 3 days my French was OK again 😊, all 3 other passengers were French). So finally after 12 days on board I didn’t even have time to make my video about winter roads in Russia… 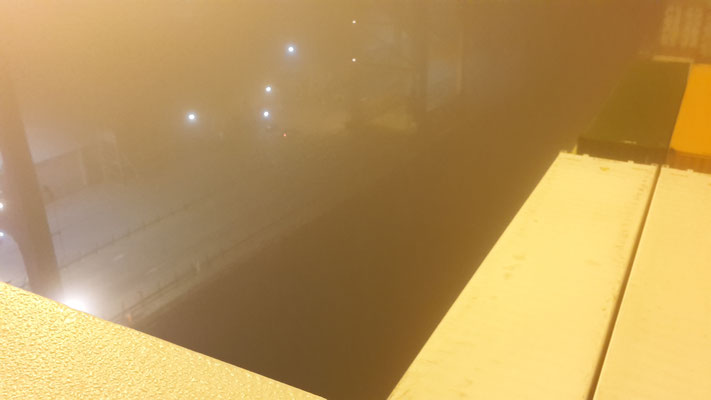 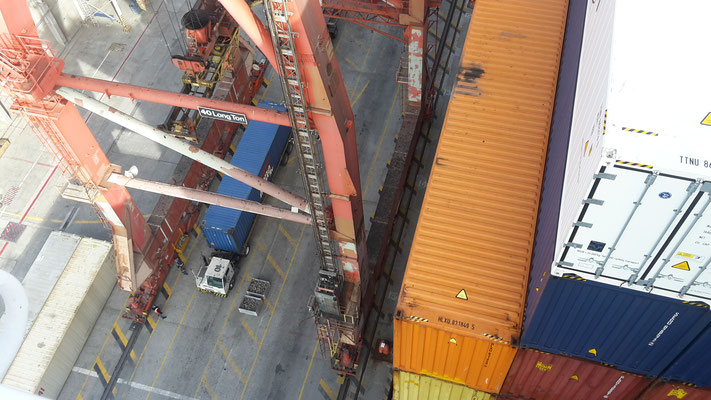 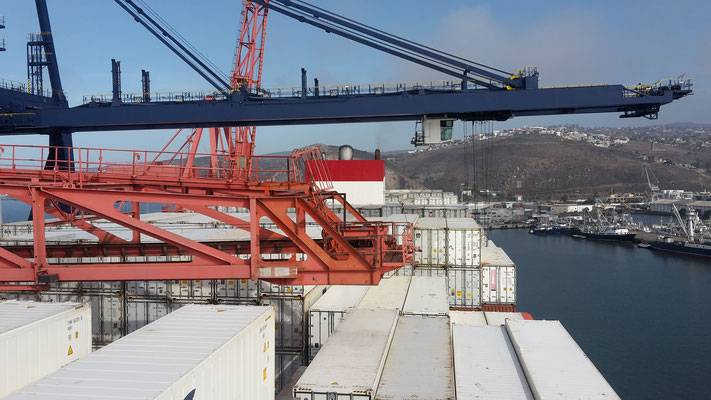 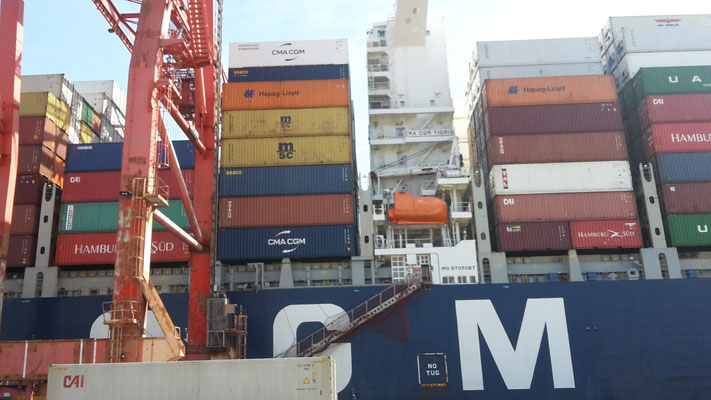 Arriving in Mexico in thick fogg!