Footprintless around the world
10. März 2018

After arriving in Ust Nera, I already had the impression to be very far in the nowhere. No train, no bus service no public transport and just bad roads leading there. Local people usually just fly if they go to travel. Mobile internet was for the first time after 3 days working in Ust Nera, but that slow that I could rarely check anything. WIFI wasn’t available anywhere. But this was in fact just the beginning of a big adventure to the even further north. 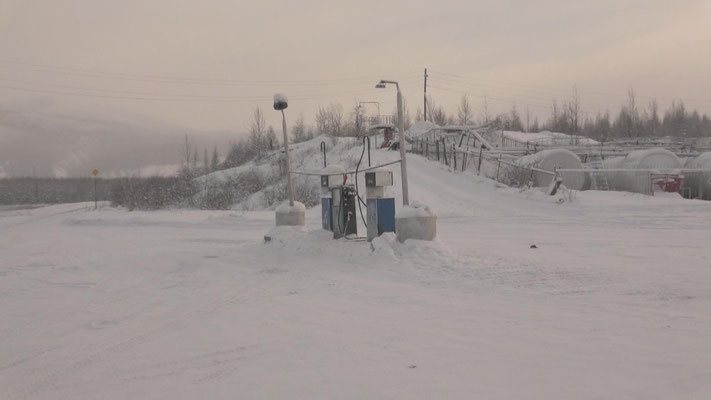 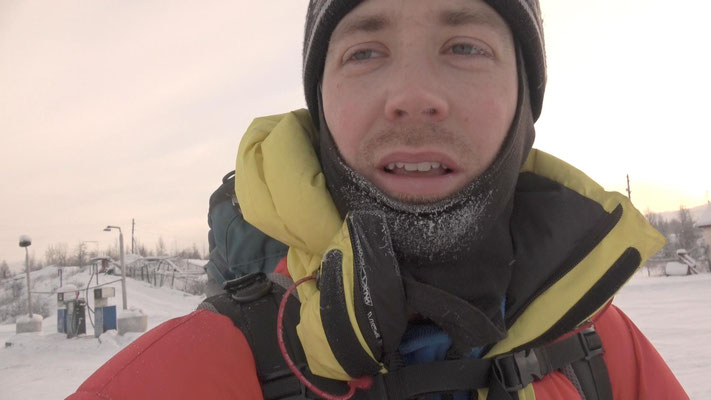 Starting to hitchhike to the winterroad, at the last fuel station!

I was prepared to wait for very long! It would be the beginning of the winter road “Arctica” with sometimes as few as 3 cars in a day. If your unlucky, they are all driving together in a convoy. I went to the last fuel station in the village, where I could only wait outside. But I was still close enough to the village to get heated up somewhere if needed. It was about -36°C this day. I was waiting for about 1.5h outside, there wasn’t much traffic at all and no one yet to the winter road. Then a car stopped, he wasn’t driving further but invited me to sit in his car at the warm for a moment, waiting at the fuel station. He tried to call some friends who could probably know a truck driver driving on the winter road. We had a nice discussion, but at the end no one of his friends (and he really made a lot of calls for me) knew anyone soon driving on the winter road. The best hit was just in a week.

So, I stepped out again, ready to wait for 2 days if needed. But another hour later I was really lucky, when a car stopped and told he was driving to “Sasir” I asked him twice to be sure I understood him well. There wasn’t really any space in the car, however he still accepted to take me, and I was really happy to been able to ride to the first small village on the winter road. I also knew there would not be any hotel there and that it was a small village of just 500 people. However, I wasn’t worrying at any moment not to find a place for the night. After all the amazing people I had met in Yakutia, I was 100% sure that anyone would invite me! 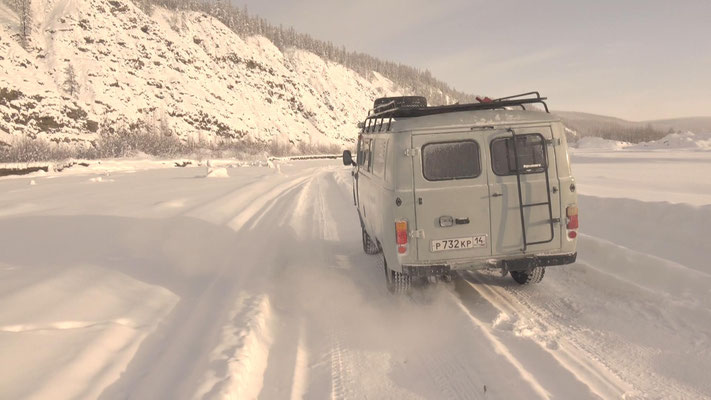 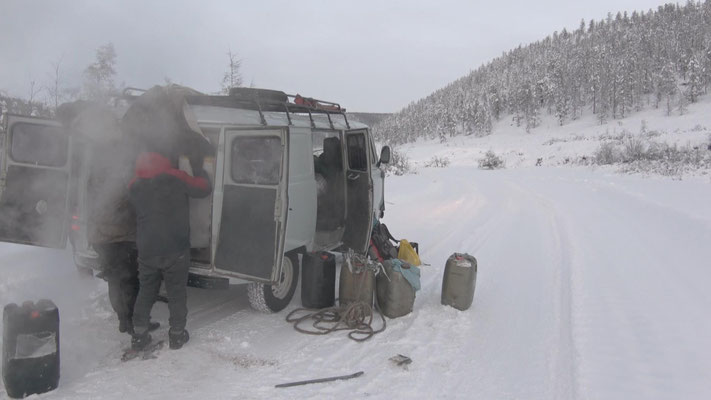 Finaly on the winter raod. The car full of lacking fuel canisters, a horrible and strong smell all the ride long!

The following trip was then one of the most uncomfortable trips I ever had by hitchhiking! Not because of the people, they were really amazing! But there was just so few space, I couldn’t move my feet’s for a cenimeter. But the worst was the really strong smell of fuel. Half of the car was filled by fuel canisters. Diesel as well as Fuel. And the canisters were lacking badly! So that the strong smell was just filling the car all the trip long!

The people I was riding with were partwise “Evenki”. An old tripe in Jakutia, similar to the “Nenets” in Salechard, where I was invited 3 days in a traditional chum tent. And when we were in the middle of the winter road between Ust Nera and Sasyr we suddenly saw some light signals. And what a surprise, we stopped over at a local Evenki tent, friends of the driver. We stopped there for a tea and some pastas with dear meat. This time the dear meat was cooked and not raw 😊 It was already night, so it was hard to make pictures. The region is quite mountainous. When I asked them for their deers, they spontaneously offered me to show them. And by snow mobile we were riding a short ride up the steep mountain in deep snow, until we suddenly were standing in front of some deers. They were quite bigger then the once I saw in Salechard. And I was told that people here are also riding on top of deers, what’s not been done in Salechard. 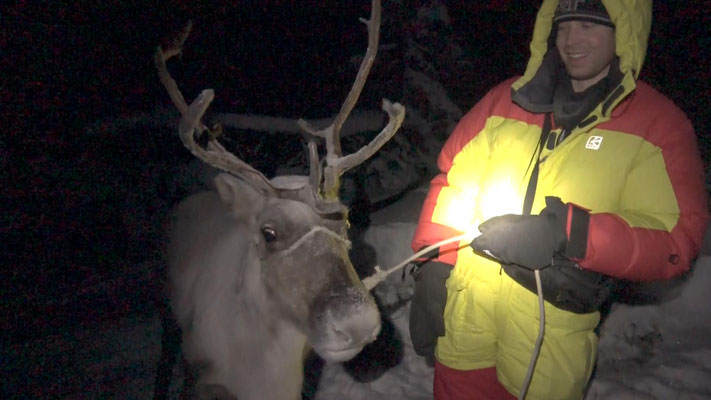 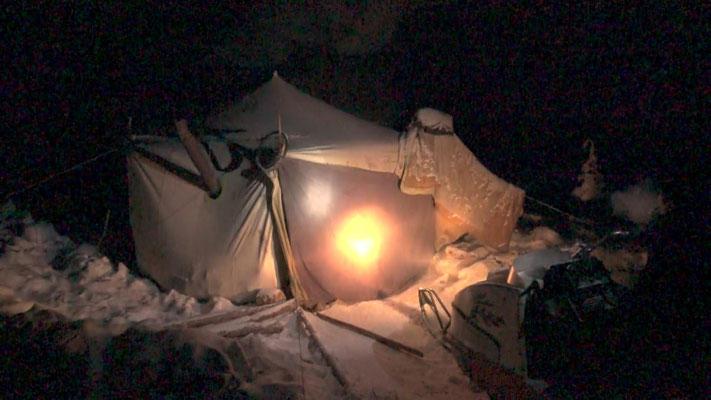 What a surprise! Meeting local Evenki in their tent and deers, somewhere on the winter road in the nowhere!

The trip was long, far longer as I thought. It took us 15 h for the first 180 km of winter road. Already really impatient I was all the time checking the km, sometimes thinking I can’t make it 10 min longer. But there was just cold taiga all around, no option to quit the car! After 15 h of ride at 2 am I was already really exhausted, didn’t yet sleep any minute, it just wasn’t possible at all in this few space and strong smell. I was already worried if one could eventually get high of strong fuel concentration in the air. And then looking on the 9 km left on my mobile app, I thought, so soon we will have made it, just half an hour maximum. But I was completely wrong! 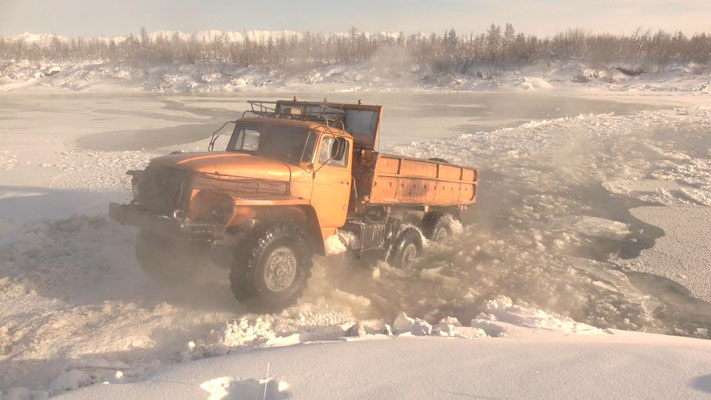 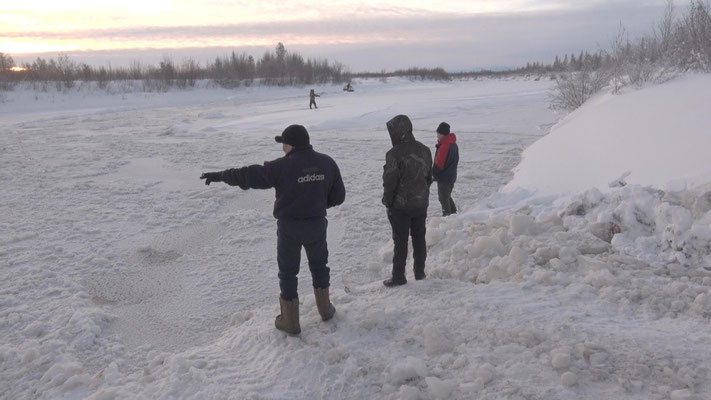 Big problem: How to cross this bad frozen river in our car?

At this moment, a big river appeared. And despite the cold temperatures, the ice layer wasn’t thick enough for our car. Over 1 m water below. No way to cross today! Sleeping outside in this cold, no option, walking to the village alone in middle of the night, also no option! Where to sleep there arriving in middle of the night? So the only option, sleeping in a car with no space and full of fuel dust. However, exhausted from the trip, I got some sleep with the head on my knees, sitting on the chair. And for the first time I started to understand why people never tell you how many hours are left to the goal. When I asked them at the beginning, they told me: "we don't know, all depends on the road. Maybe we will arrive in 10 h, maybe we will never arrive. Most probably something in between :-)" 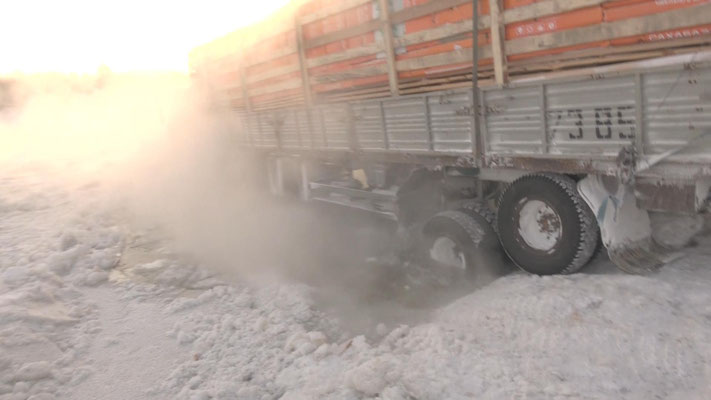 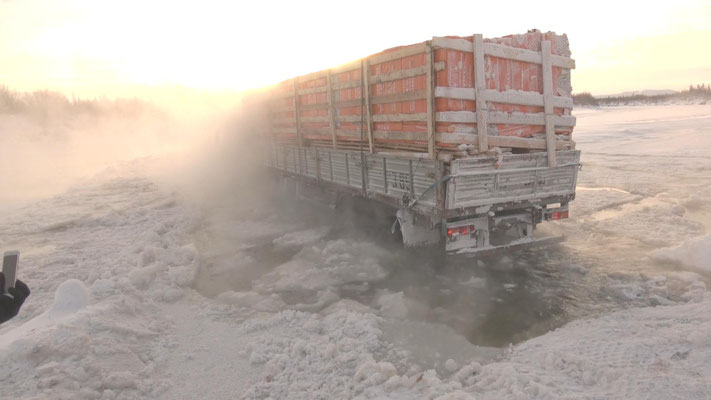 Big trucks on winter road extreme! They just drive through! However this truck got finally stuck in middle of the river. But some hours later with the help of the truck that came to search us, he mannaged to get out.

We had to wait a full 12 h until we got some help of another truck! He was big and strong enough to cross the river and took us to Sasir. I got 2 invitations to sleep and eat at their home from the people in the first car. And decided to accept the invitation of the driver. He planned, with another truck, to drive to Serianka the same evening. 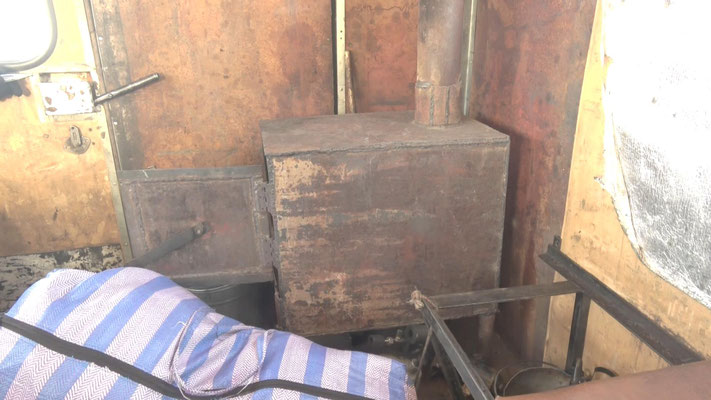 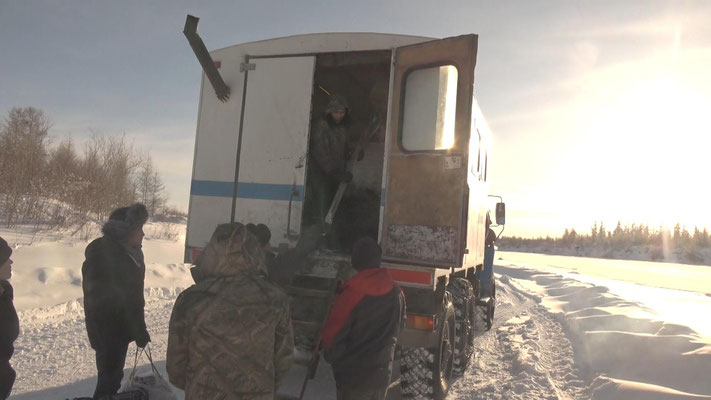 Finally help is there! After 12 h waiting in our car this Camos truck brought us to the next village. Our car was left back.

The live in the little village was amazing! The fastest way to the next village was about 24 h driving by car over the winter road, so really far and not always possible. However, the village has no hospital and even no doctor at all. 3 to 4 times a year a doctor just visits the village for a few days. If locals have to travel, they usually do it by plain. And 9 months in a year they anyway don’t have another option. But the ticket is expensive, so most of the locals are just always in this small village or leave it maximal once in a year! What a live it must be, just to live in a whole world consisting of a small village with 500 people and nothing more! The toilets are outside, water just of ice blocks of the lake. No tab water, no shower, just sauna, but not every day. And when I was there, there wasn’t sauna, so no way to take a shower. 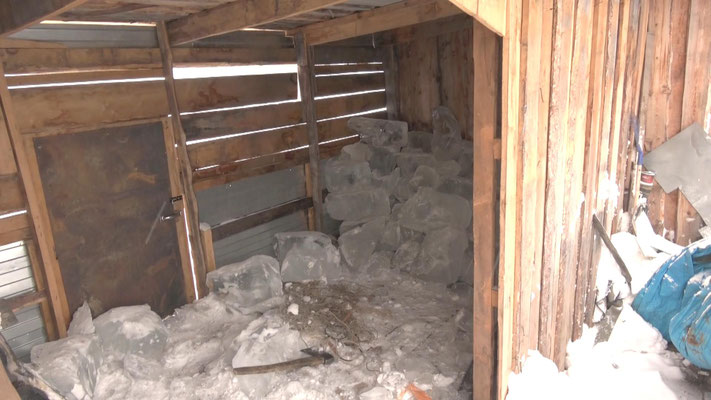 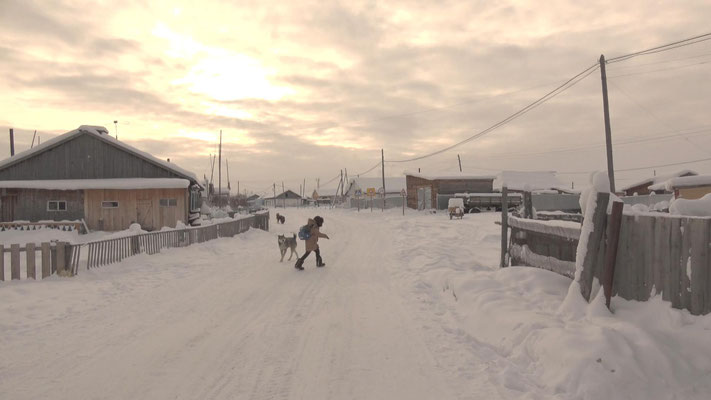 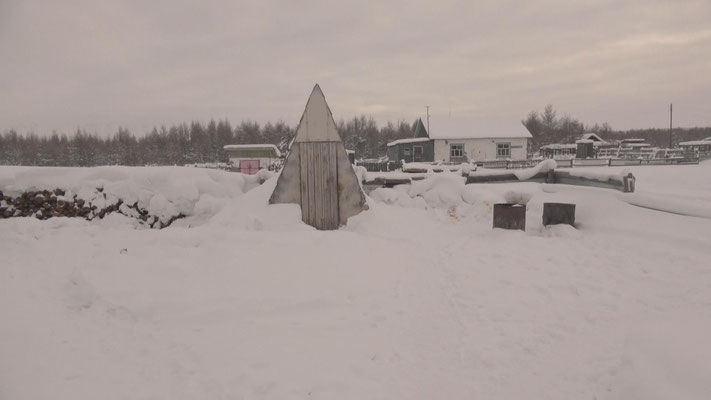 The traditional village of Sasyr. First pic. Ice for drinking water, 3. pic. the toilet, outside...

In the evening however, the truck wasn’t yet ready. The driver told me to wait another day. I slept a night in the house of his family and by the next evening his truck still didn’t work. He was in the garage, a wooden oven running to heat the motor up, but it was still too cold to run. I then decided to wait no longer in such a small place, where you can walk once through the whole village in 10 min. A small oasis in middle of the taiga, I decided to go to the main road to hitchhike further, despite it was already 8 in the evening, and dark night of curse. But this you can read in my next post, which will hopefully come out soon...