Footprintless around the world
24. November 2017

Minsk and live in the last dictatorship of Europe

When I arrived in Minsk on my first day, I imediately realized how different this city is from all other Europeen citys! Space is truely no problem here! The streets are huge (often up to 4 lines in one direction, so 8 in total!) and the sidewalks are often 10 m wide! There are some immense squers, way bigger then a football field! And also building are huge, all in tipically soviet style! So much space, so huge buildings and squers and all this despite the whole city was completely destroied in second world war (90% of the buildings were gone). Something that would never be possible to finance in western Europe. I guess it was only possible here, becouse after second world war it was still comunism, so everyone had a job without earning money...

But yet another thing surprised me: The cleanliness of the city! The streets are clean like in Switzerland, you can't find any dirt at all! Something I really didn't expect for eastern Europe!

The public transport is quite good and freequent, but not so easy to understand. Everyone told me I should take a Taxi the first day, but I was sure I could find my host famally by bus. However when I was in Minsk, google maps didn't work, the buslines are not saved in this app. I had a description from my host familly, where I had to take a bus, which number and to which station. But the challenge allready starts, when you wan't to cross the street! Al huge, big street and just nowhere a pedestrian crossing! 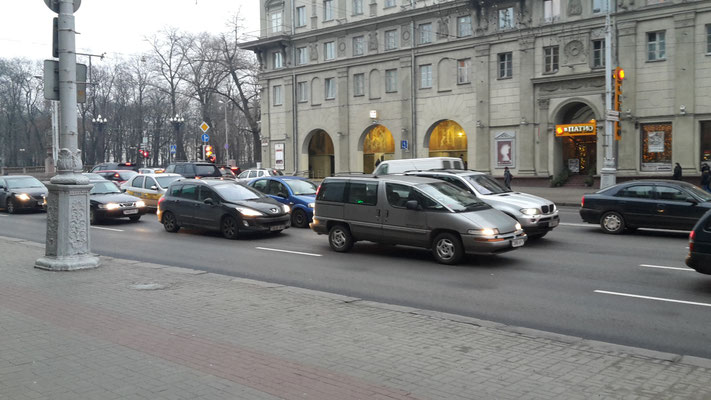 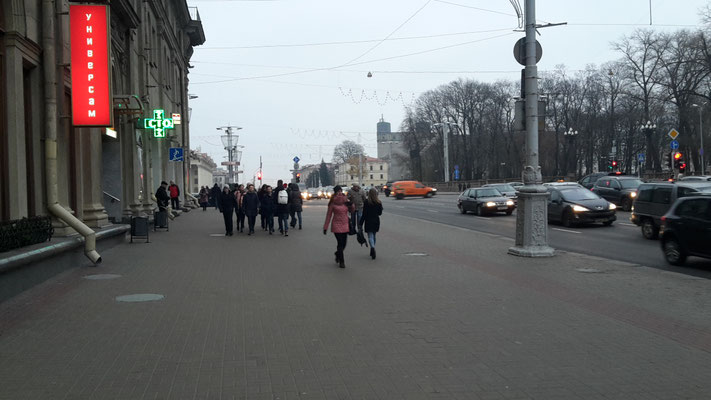 How to cross the street here? On the left pictures throuhg the underpass (yellow entrance). On the right foto underpass can be seen on the left. At the same time this underpass is the metrostation, really not so easy to see (small M over entrance)

It took me some minuts, until I reallised, that there was an underpass, becouse the entrance was like the entrance to a building, really something I didn't expect!

Finally on the other side of the street, and still in the underpass there appears suddenly a huge shopping center, all underground! Not visible from the outside, in huge dimensions and on several floors!

To take the metro was a challange. It startes by finding the entrance! Often just markt with a very small sign over your head, you sometimes neet to search quite well to spot the entrance. Often hidden somewhere in an underpass. And once inside the metro station, the names of the stations (written in Belarusian) just didn't fit with the names on my map (written in Russian). It took me about 10 min. to understand, if I am at the right line and in which direction I have to go! 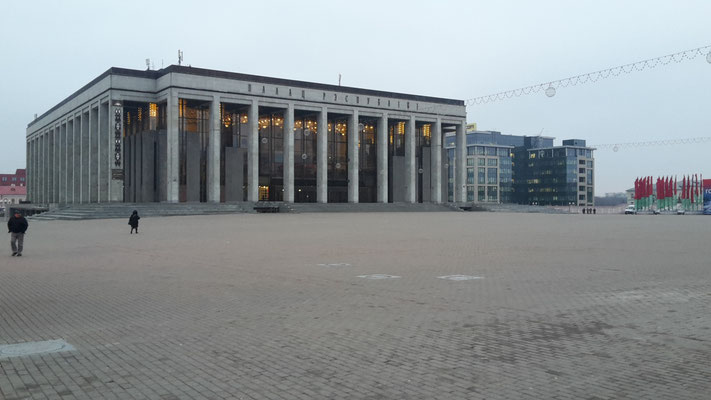 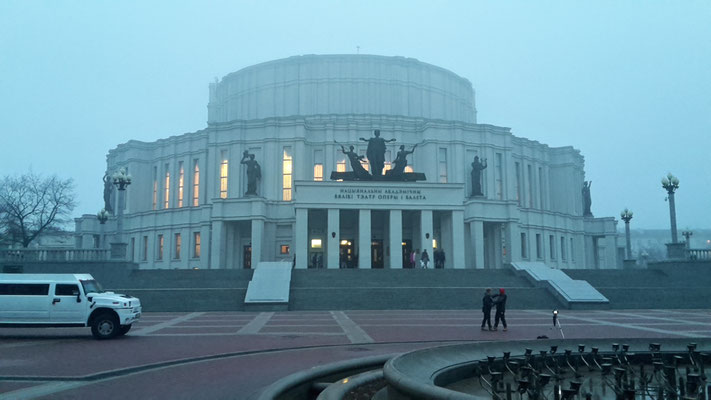 Soon after I found the area where I shuld take the bus number 1146. Which turned out to be a Marschrutka, some kind of Bus-Taxi, or Minibus. They usually stop just before the bus stop, but only if you wave them down and their number is not written on the station. You just have to know where they are driving. It was quite an adventure to find the right station. Everyone I asked directed me to another place, and just no one spoke any English at all! Finelly I found the right street and I saw my bus number passing by. It turned out that my final bus station where I had to go, was existing twice, once in the south of the line and once in the north. This was also the reason everyone wanted to send me in the wrong direction. And when I got in in the right Marschrutka, the driver told me again I would be in the wrong one. So I went out and to the other street side, where I realised that it can't be the good place becouse I had to head in the north of the city, and this street was leading to the south. I went back to the other side again, where I have allready been, and got in the next one without asking for the place.

The payment system was quite funny. You sit on a chair, pass the many to the passenger in front of you, the money goes trough all passengers hands to the driver, and the change comes back the same way!

Finally I reached the end station without actually beeing at the goal. It's only later I realised, that the bus number 1146 normaly stops at "Expobel" But maybe 1 out of five goes further. But however I wasen't too far from my host at that time, so I just walked about 15 min, and finally arrived, while my host was allready worried becouse it took me so long to go there :-) 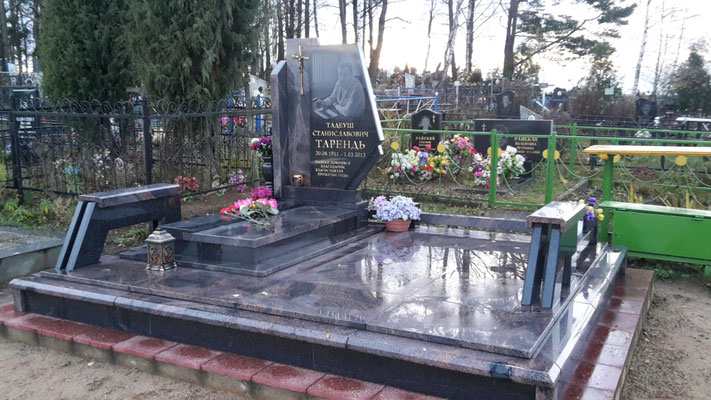 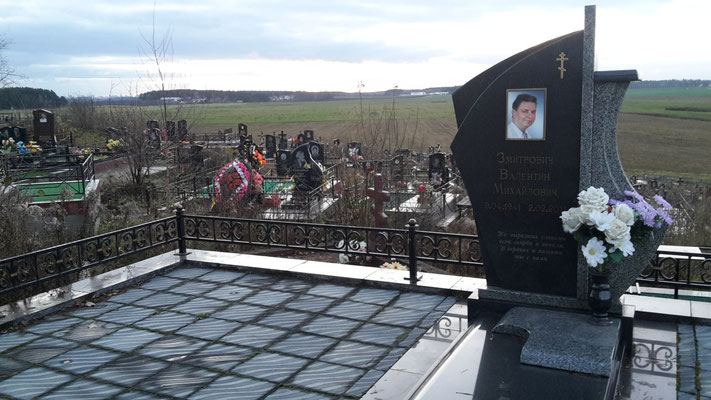 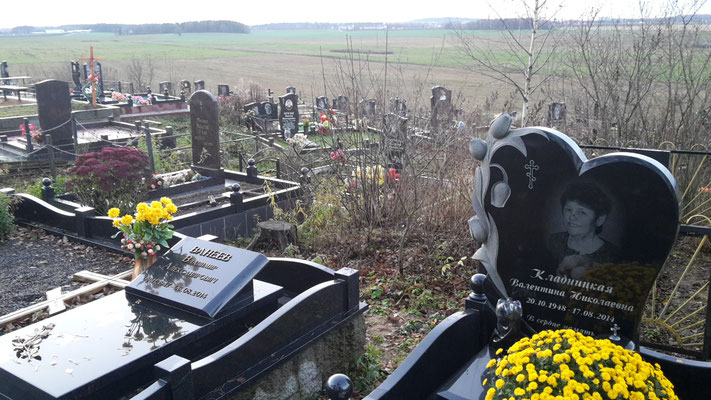 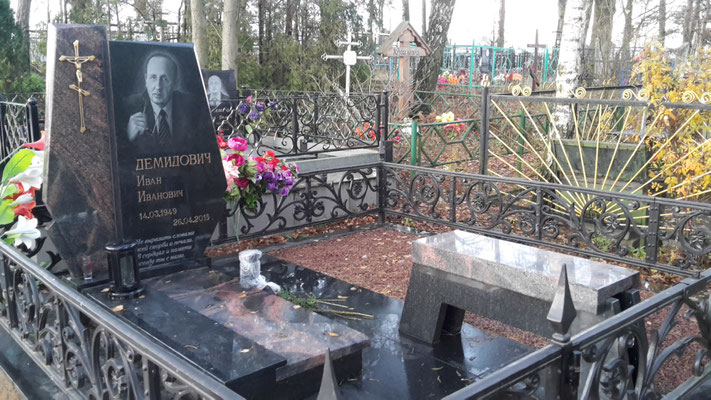 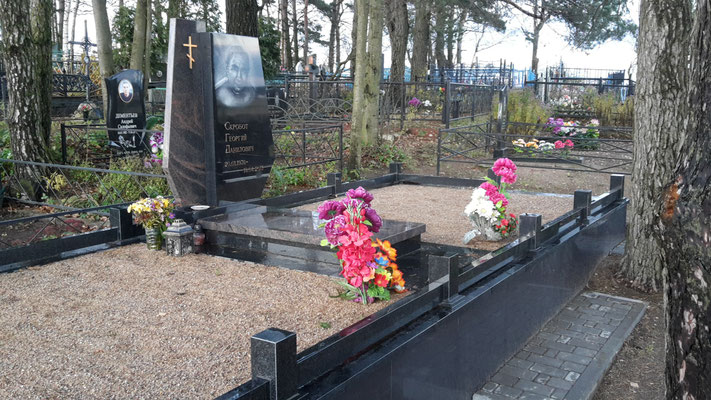 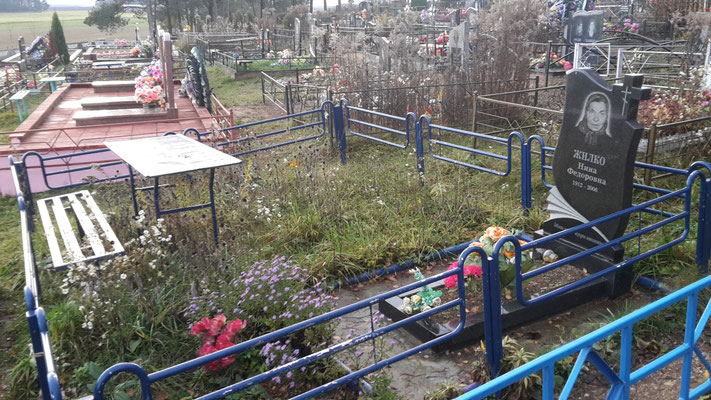 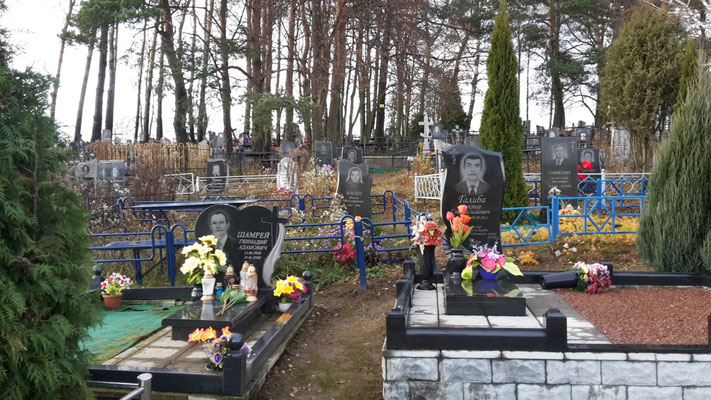 Cemetery, much more beautyfull then in Switzerland.

When you walk through the streets, you will never ever meet anyone smiling! Are people here so unhappy? Are they so represst below the dictatorship? Or is it simply the bad weather? I'm here since 3 weeks now, and I saw the sun just about two times for maybe 1 hour! But no, it's none of aboves points, it's just cultural. For western Europe people it is quite a strange feeling, when you go in a shop, to a reseption or anywhere else, and people sell you their products without any smile at all! While western people would think, they probably had a bad day or they are not interested to sell us anything, here it's strange for people if anyone smiles. I actually allready met people, who were asking: "Why are you smiling, is something not ok? What's happenging?"

The Western smiling, which is just used to be "frindly" without actually having a reason to laugh, is called a "false smile" here. And locals think "Better having no Smile then a false one". And while in our culture, we basically trust everyone until we learn the opposite about this person, here for people everyone is suspicious until they get to know him better. (However it doesn't meen it's not a save place! Due to high penaltys pikpoking or any other crime can hardly be found here, it's actually a really save place!) So it's not so easy to make a friendship here, but once 2 people are friends they would do everything for each other. Also in this case people are thinkting "petter to have only a few true friends, then ducends of wrong friends". When you meet some people in a train or a bus, they are usually not talkativ at all. But when you manage to start a conversation, then you can suddenly have deep and very interesting conversations!

One quite funny experience I had: When I went to eat lunch in a Restaurant, it was full of people, a long line was waiting at the entrance, becouse all tables were used. But often there was just 1 person on a table with 4 places. When it was my turn and the weighter showed me my table, I told him that I don't need 4 places, that he can just set someone else here too. And he was just laughing about this idea, without taking it serious. This - while in Switzerland we are often sharing tables in a full restaurant for the lunch.

While Lukaschenka is allready president since 25 years,  holding at quite some Soviet structers, there are some huge differences to western countrys! 70 % of the companies here are state companys, only 30% are private. Here, basically one village produses mainly pork, the next village mainly eggs, and the next one mainly milk. The farms are state companys, sallerys paied by the state. And 70% of the money they make has to be paied back to the state! A system that really remeindes to soviet time.

Sallerys in state companies are low, starting at 150 $ / months and going up to about 350$ / months. While the mean sallery seems to be at about 250$ / months. However costs of living are at the same time really small! Health system is free of charge, student dormitorys can be found for just a few dollars a months, normal apartments for about 200 $/month. For 10 eggs you pay just 0.75 $, 1 kg of meet can be bought starting at 0.45 $ for chicken with bones (or 2.5$/kg for nice chicken filets), Kino tickets for jsut 1.8 $ and the most amazing: 2 h of train travel cost just 0.75$! Further, electricity is subventioned and const only 0.05$ for a kWh, also water and heat are extremly cheap, so that costs for water and energy in an apartment are just about 20 to 50$ in a months. 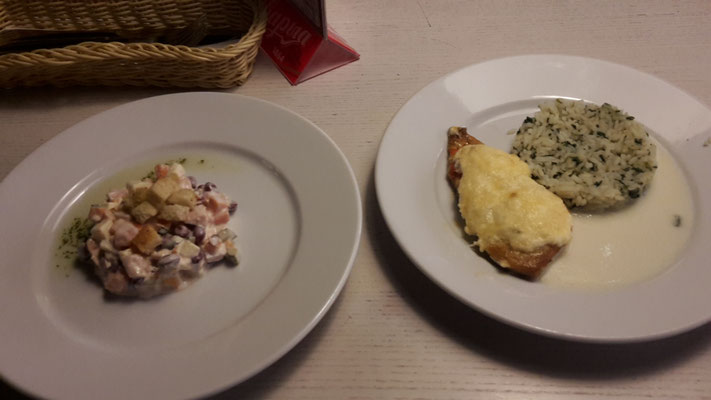 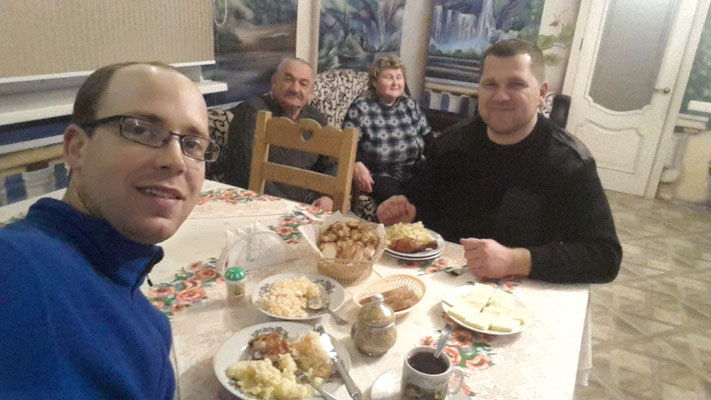 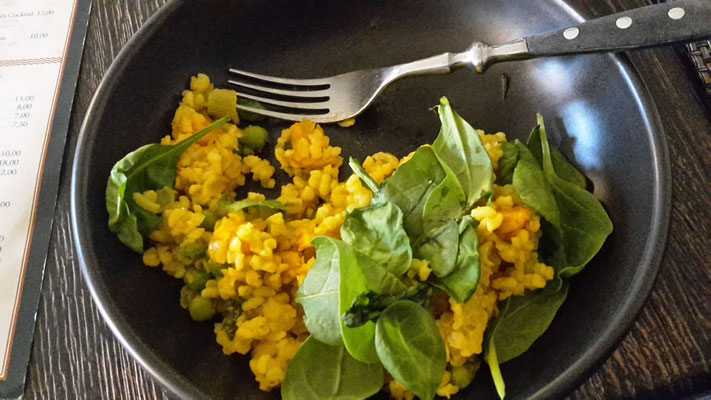 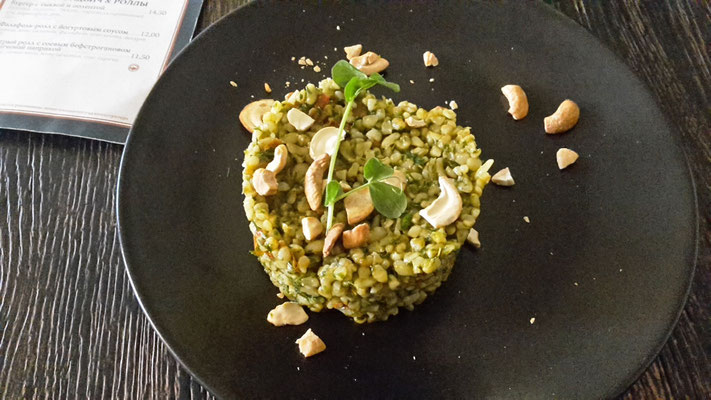 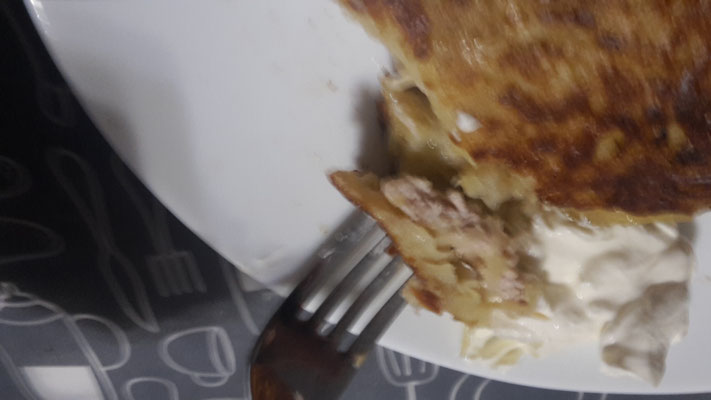 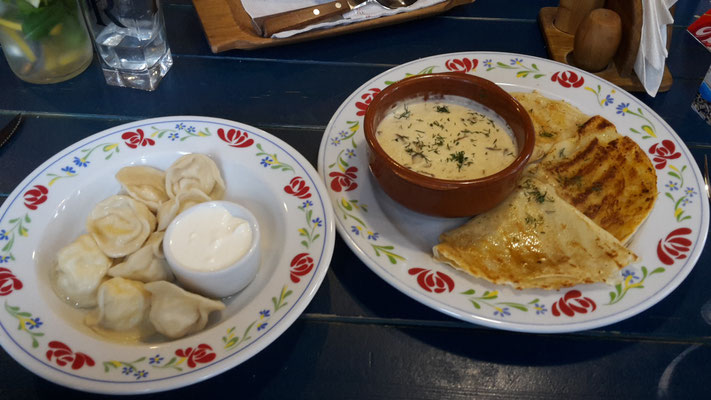 Meals in restourants are often quite small, but very cheap! A lot of cheese and patatos, and even lunch meals with soup + salad + main (about 3-6 $) are often so small, that I have to buy something else in a shop after eating :-) But at the other hand, fat people are almost inexistent here :-)

Freedom of speech is really small here. All newspaper and TV channels are controlled by the state. Demonstrations are not allowed. Some time ago, some people wanted to make a demonstration. But becouse they weren't allowed to say anyting, they were just sitting on a place without actually speeking, and just claping in the hands. Clapping in the hand got then the symbol of resistence. So today it's not anymore allowed for a group of 3 or more people to clap in the hands! That's maybe one of the most absurde laws here ;-)

At the last elections, Lukaschenka got 83,5 % of the votes, claiming that in reality he got much more, but to make the result more trustworthy he would publish a lower number! But when I asked arround, there are of corse people (mainly older people) who are happy with the system, becouse it's quite stable, with no bigger konflicts since a long time, but far more then half told me they didn't vote for the president. So of corse there is the question where he found this 83,5 % ;-) Of corse noone here beleves that the votes were fair...

One funny fact for the end: When you have no job here, you have to pay a tax for not having a job! You don't get any financial help, however you get offered some simple jobs you could do, but if you take them you will work almost for free. 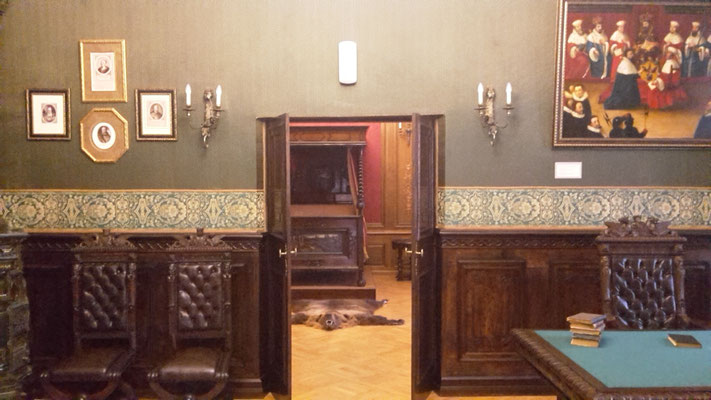 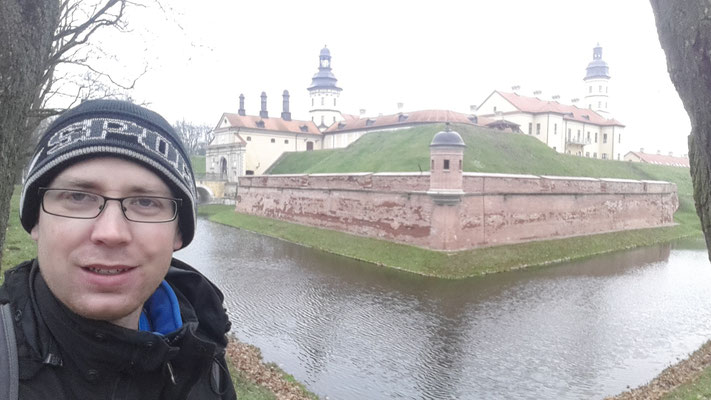 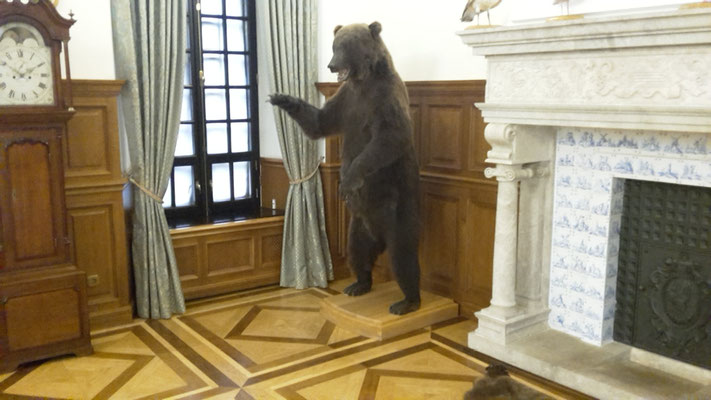 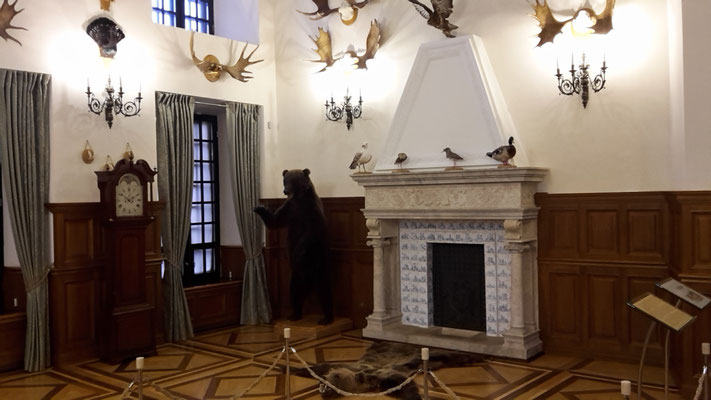 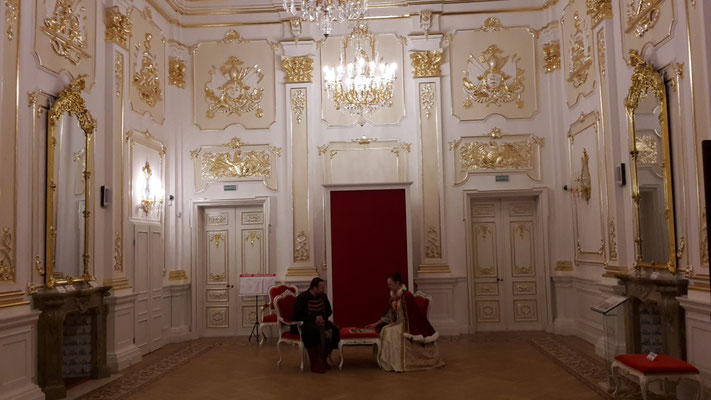 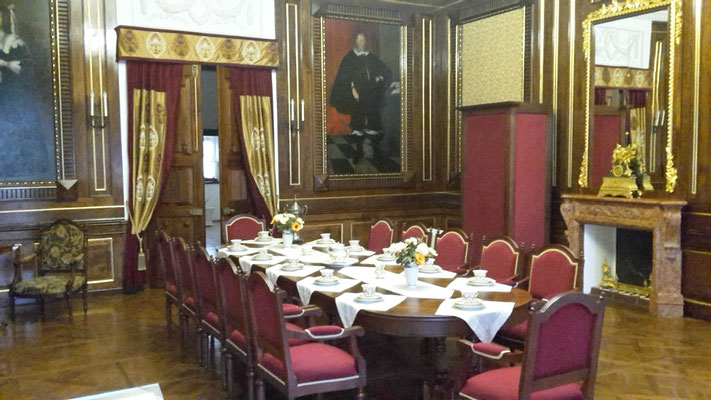 Neswizh castle, one of the few that partly survived the war - however big parts of this castle are reconstructed

Fazit - how is the live here

As a fazit, I would say the live here is largly not as bad as we may probably think it would be looking here from western Europe. People have small sallerys, but costs of living are also quite small. Unemployment is almost not existent. For sure they can buy less here, have to take more care about the money, but in generall there is not much poverty. The city is clean and impressive, people claim about sallery and weather (and the weather is actually really bad ;-) ), but in general they don't live so much different as in other countrys. Crime is almost not existent, its a really save place! And even homless people can rearly been seen. People like the stability (mentioning Ukraine as a reason of not asking for an other governement), the junger generagion is joking about their president, probably wishing a change, but far away from starting to actually do something to change it. From my experience I would estimate that probably just 30 % to 40% actually suport the politiv of the president, but the biggest part of the rest is quite indifferent, they probably claime about the politic, at the same time mention the stability, and even not that happy with the actual situation they are not really motivated to actually do something for a change...